The news that the lens from the lighthouse at Point Conception is moving to the Santa Barbara Maritime Museum reminded me of this article I wrote a while back. 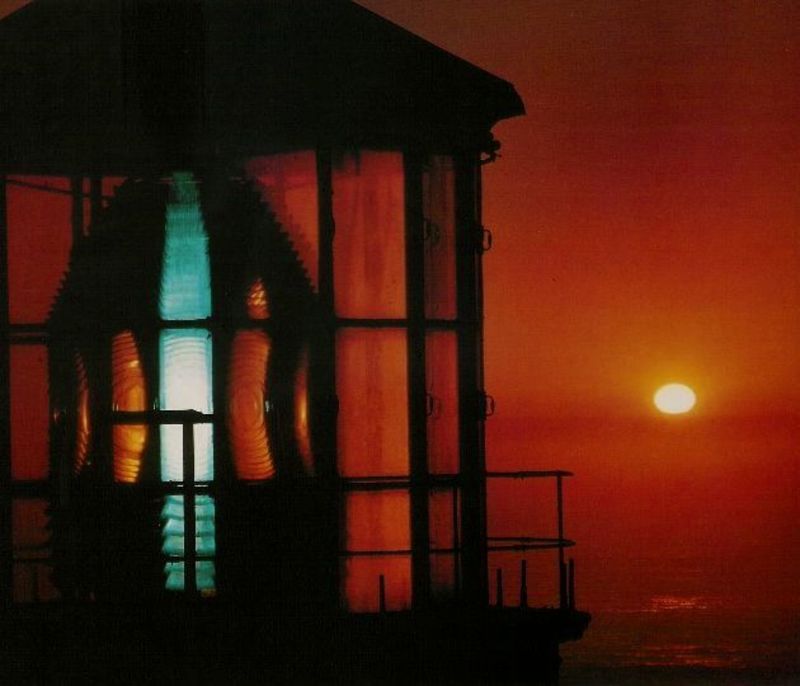 The Chumash Indians revere it as the door into eternity, the jumping-off place to the afterlife.

For mariners it is a place of fear, a tempestuous, treacherous, fearsome, white-capped corner. The great white shark haunts these waters, and has killed divers here. The surfers who brave the towering, icy-blue walls of glass, and the windsurfers who revel in the blasts of ripping wind, play in a watery valley of the shadow of death.

This is Point Conception; a mysterious, fog-shrouded, surf-torn promontory jutting into the Pacific, marking the northern entry to the Santa Barbara Channel. Atop the lonely, jagged black rocks that disappear into the wild roiling foam, framed by water and sky, haunted by the eerie cry of seagulls and the moan of the foghorn, shines the Point Conception Light, a bright beacon to mariners since 1856.

Hundreds of creaky, rotting wooden steps lead from the bluff down to the lighthouse. First built on the bluff, it had to be moved to the rocks below to get under the persistent fog. Inside is a cozy paneled living area, abandoned when automation replaced the lighthouse keeper with clockwork. The rich wood hues give way to the stark iron steps of a spiral staircase, leading to the light above.

The original lens, still intact but retired, is a marvel. You can stand upright inside it, surrounded by hundreds of individually crafted prisms which throw sixteen piercing beams of light, like spokes from a wheel, miles into the darkness. Built in France in 1855, it is a twin to lights ringing the oceans of the world. Even the Great Lakes have versions of this Fresnel lens, whose welcome beams have saved countless sailors from death.

Offshore, the whales move in slow motion through the water, spouting white plumes high in the air. Dolphins pass in ethereal pods evidenced by sudden, shiny fins, slicing the water in graceful arcs.

This is a haunted land, marked by pieces of the past. Chinese laborers lived in makeshift camps here when they built the railroad up the coast, leaving coins, buttons, bits of opium pipes. Arrowheads and bowls are still found on the beach. Unknown fossils spill out of the crumbling sandstone that rings the pounding Pacific’s shore. Seals cavort on the desolate beaches, alongside the bleached bones of their friends.

A few miles north, the gaunt tower of Space Launch Complex Six stands like a specter in the fog. It was built to launch the space shuttle into orbit. The viewing area for the TV cameras, housing for the astronauts and their families in renovated Coast Guard structures, and a podium for President Reagan had all been mapped out, when the Challenger exploded.

A stone’s throw away from this space-age skyscraper is Solstice Cave, a sacred Chumash site where shamans tracked the seasons, as a beam of sunlight pierced their painted cavern.

Juan Cabrillo was blown back toward home here on his expedition of 1543. Sebastian Vizcaino named it “Punta de la Limpia Concepcion,” Point of the Immaculate Conception, in 1602.

At Honda Point, rusting iron appears from the waves at low tide. On September 8, 1923, in the worst peacetime naval disaster of all time, nine destroyers missed their turn and ran onto the rocks near here, killing 23 sailors. Only a miraculously calm ocean spared hundreds more from certain death in the dark, freezing water.

Cows crash through the tangled sagebrush in the rocky canyons of gnarled scrub oak. Huge rattlesnakes caution the unwary with their castanet vibrato in the thick underbrush. A lonely coyote trots warily over the sun-dried hills.

The tumbledown houses of former lighthouse keepers and coast guard families decay in the moving, salty mist, like a New England village lost in time.

At night, the stars gleam like insanely bright eyes from a knowing primeval darkness, onto the ghosts of the passing human parade.

And in the gathering fog, the light’s bright beam peers into infinity.