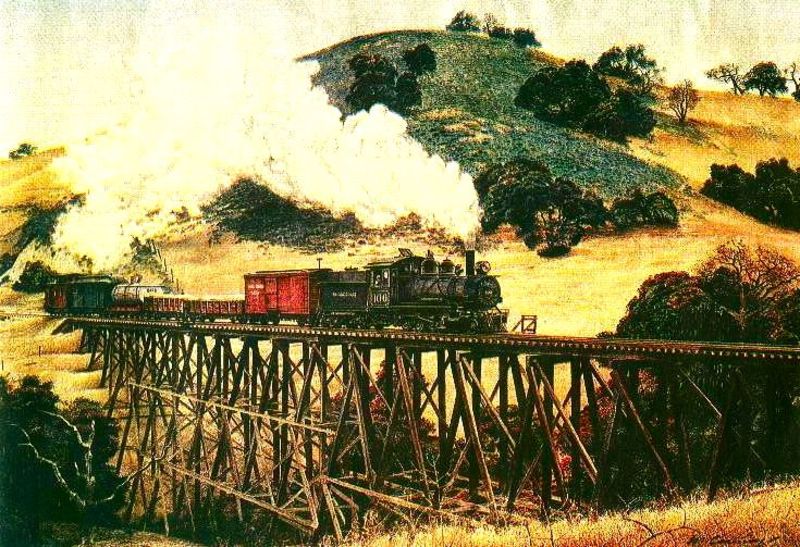 Merv Corning’s Pacific Coast Railway (this trestle was near the Hwy 154/101 intersection) - See astonishing real footage of the last train out here.

It was April Fool’s Day. The man on the phone was describing his ride on the narrow gauge steam train that once dead-ended at Mattei’s Tavern in Los Olivos. Early on, passengers switched to stagecoaches there.

Skeptics could be forgiven for raising an eyebrow. The last train to Los Olivos ran on January 10, 1934, and the tracks were later torn out and sold for scrap metal to the Japanese, who shortly thereafter shot it back at us. But this was no joke.

“It was slow and easy,” said Wilfred Lyons, 92, the only person I’ve ever known who actually rode on the fabled Pacific Coast Railway (PCRY).

After I wrote about Wilfred Lyons’ aunt, Grace Lyons Davison, my brother Bert, editor of The Cambrian, put me in touch with Wilfred, a Cambria native.

“In 1922, when I was ten, I went on the narrow gauge from San Luis Obispo to Los Olivos three or four different times,” Mr. Lyons related.

“They had one passenger car. Sometimes I was the only passenger. It was about a four hour trip. There were a lot of stops along the road, mostly picking up merchandise.

“In Santa Maria they picked up produce, and a lot of farm products. One train car had live animals in it.”

“Once we stopped at a crossing, just before we got to Los Olivos. A Model T had broken down on the tracks. We had to wait while the engineer, conductor and a couple of crew members pushed it off.”

“My grandfather was Samuel Lyons, who was Justice of the Peace in Ballard for over 50 years. Lot of times he’d hold a little trial in his front room,” Wilfred said.

“Grandfather Lyons had six children, my dad William, Samuel, George, Jeannette, Grace and Alice. Jeannette, born in Ballard in 1886, was the only child born in California. The family came from Pennsylvania. My grandfather was affected with coal dust, and the doctor told him he’d have to get to a warmer climate.”

“They arrived in Ballard in 1882. My father helped build the first Presbyterian church.”

It is still standing, a classic little white country chapel now used for weddings and funerals. I was married there, in 1972.

Teaching ran in the family. After a teaching stint in Cayucos, Wilfred’s father William and mother, Anna Marquart Lyons, ran Lyon’s Store in Cambria for four decades, until it burned to the ground in 1951. Aunts Grace Lyons Davison and Jeannette Lyons had extensive teaching careers, and wrote valuable local histories. Visit the Jeannette Lyons room at the SYV Historical Museum to learn more.

“The teacher was my aunt, Alice Lyons Potter. I lived with my grandfather Samuel Lyons half the year, and half with aunt Alice.”

“Grandfather Lyons kept me busy, catching gophers. I got five cents a gopher. Most of what’s now the Ballard cemetery was his land. He farmed, had a little orchard, planted grain.”

“My grandparents were very strict religious people,” Wilfred remembered. “On Sunday we weren’t supposed to do anything but stay home or read the bible.”

To slip the leash, he’d head over to the cousins.

“There were four boys and one girl in my aunt Grace Davidson’s family, Art, Donald, Norman, Sam, and Margaret. I’d tell my mother I was going to Aunt Grace’s – it was just a short distance. The Davidson boys said ‘There’s a ball game in Los Olivos!’ Off we’d go to the ball game all day.”

Wilfred Lyons and his wife Hazel worked for William Randolph Hearst from 1934 to 1942, helping the French chef, stoking the fires in the forty fireplaces, wrangling the trail rides, and chauffeuring stars like Clark Gable, William Powell, and Cary Grant up the storied “enchanted hill.”

“We lived at the castle, both of us,” he recalled. “I knew Marion Davies very well. She gave me two autographed pictures of herself.”

“He was really cranky,” remembered Mr. Lyons. “He was a domineering sort of person.”

Wilfred Lyons’ most memorable day in Ballard was Christmas of 1924.

“We had gone down to my grandfather’s home for a large family celebration. While taking a bath, my uncle George knocked over a kerosene heater in the bathroom and caught the two-story house on fire.”

“Everything was lost, including all the Christmas presents,” Wilfred lamented.

Mr. Lyons is, alas, no longer with us.

The Pacific Coast Railway, by Kenneth E. Wescott and Curtiss H. Johnson, published in 1998 by Benchmark Publications in Los Altos, is a stellar tome, 296 pages of photos and fascinating, detailed minutiae about the PCRY in Los Olivos, and beyond.

The rail route ran 76 miles total, from Port Harford (Avila Beach) to Mattei’s Tavern, arriving in Los Olivos on November 16, 1887. It was just intended to be a whistle stop, but they ran out of money.

The original plan was to continue on to the Santa Ines Mission, via Alamo Pintado Road, along the river to Buellton, up Nojoqui creek, through Gaviota, and on to Santa Barbara. “Tunnels needed,” noted the engineering sketch.

Appropriately enough, railroad buff Tom Petersen has rebuilt one of the only PCRY cabooses (#3) still in existence, at his home on Alamo Pintado Road. Numerous photos from Mr. Petersen’s collection are featured in the book.

At Avila, travelers could stay at an ornate Victorian hotel hostelry, the Hotel Marre, or board one of the parent company’s steamboats and journey on. The Pacific Coast Company sailed up and down the coast, from San Francisco to San Diego, with additional stops at Santa Barbara and Los Angeles.

For 47 years, the little engines that could chugged past the sage and chaparral of a growing Central Coast, hauling passengers, sugar beets, hides, cattle, wool and wheat. Mail, machinery, oil and eventually even automobiles were on board. Beans, butter, cheese, lumber, vegetables and bootleg whiskey rode the rails. Standard Oil, and Union Oil, both had Los Olivos warehouses.

The Depression, a loss of lucrative mail contracts, declining oil production, and improved highways were the death knell for the line, which pulled out of Los Olivos on January 10, 1934.

Oren B. Taft was there, struck by the longevity of the employees.

“Andy Ward, the conductor, commenced his service on August 20, 1892. Engineer Frost Hampton has been with the company 31 years; fireman Joseph Brown, 39 years. Christenson, the brakeman, has served his company for approximately 50 years. William Snyder, mail clerk in the baggage car, went to work in 1902,” wrote Taft.

“When the train pulled into Los Olivos on the ‘last round-up,’ Mr. Snyder carefully unlocked the mail door, climbed in, and handed George Clark of Los Olivos one small package, two letters, and a newspaper. Nothing else was unloaded from the train,” continued Mr. Taft.

“There followed a journey in the caboose to Zaca Station, three miles distant from Los Olivos. Several of us boarded, and conductor Ward charged us each ten cents. We sat in the caboose directly behind the tender and traveled at the astounding rate of 20 miles an hour. While the caboose is at the rear of the train traveling from San Luis Obispo, on its return trip the caboose must suffer the ignominious situation of being the forward car…

“Years ago, cattle, wool, hides and wheat were shipped out of the Valley by rail, but now trucks do their work more efficiently. The railroad can no longer compete. Sheep are few, and as everyone knows, the cattle industry has been poor,” concluded Mr. Taft.

“I always find myself comparing the finish of the old line with that of a condemned man having to carry the rope with which authorities intend to hang him,” said Herbert C Grundell, manager of the Pacific Coast Railway from 1937-1941. “The old narrow gauge spent its last few months carrying rock and other ballast for the new highway (Highway 101) which paralleled its tracks. This furnished transportation for the trucks, which strangled it financially.”

The locomotives and rolling stock, some of which had come from Cripple Creek, Colorado, finished up as far afield as the Oahu Railway in Hawaii, and the White Pass & Yukon line in Alaska.