The Farmer Is The Man Who Feeds Us All 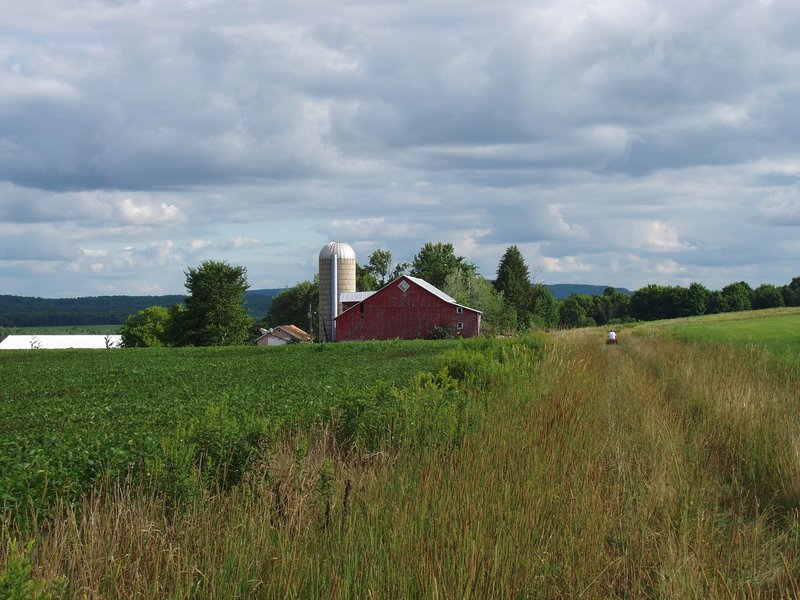 Green is gone, the flowers are fried, hay bales fill the fields, time to bring in the sheaves. There’s a tomb raider aspect to entering the vast shadowy spaces of a big barn, mysterious shafts of mote-speckled sunshine lighting warm, smooth wood, dusty antiques forgotten in the spider-webbed recesses.

Crop circles aren’t from outer space, they’re what farmers do for a living. There’s hypnotic therapy in ever-dwindling ovals, farmers everywhere have found from time immemorial. The task is clear, the limits sure, the end finite, fixed by the field. Whether racing in a crowd of combines across the wheat fields of the mid-west, cultivating crops by GPS in the Central Valley, or following a mule, the farmer is the man, as the song goes, who feeds us all.

His tools and the places he puts them have iconic appeal. Stark silhouettes of barns and silos evoke work and weather and seasonal rhythm. There was a time when a majority of Americans were at work on the family farm. Today just 2 or 3% are farmers, but check out all the barn books at Barnes & Noble.

I was always a little scared of my grandfather Marquardt when we visited the family farm near Wausau, Wisconsin in summers past. Henry had passed on the responsibilities of his dairy farm to his sons and was retired on his own place, sitting by the milk shed in the sunshine dressed in his black suit, fine white hair shining in the sun. I don’t recall ever hearing him say a word as I tiptoed by. He was 93 and I was just turned six the last time I saw him on the farm, in the summer of 1959. I really didn’t know what we were doing there, that it was where Grandma grew up. But I thought it was heaven. I was afraid to talk to him, but my mother said "It must be nice to sit in the sun." He said, "It isn't so nice when all your friends are gone."

When I hauled hay summers around Santa Ynez and in Montana in the early 1970s, I loved that too, working so hard I thought I’d die, soaked with sweat, swinging iron hooks, wearing leather chaps, body covered with hay chaff, wrists scratched bloody by sharp stalks. After bucking bales all summer in the sun, we were tan as milk chocolate and strong as spring steel. The barns were often hotter than a hundred, with no welcome wind to cool things down, just a sauna-like slog until the truck was empty, the stack was full, and we were off down the road, straw wafting in our wake.